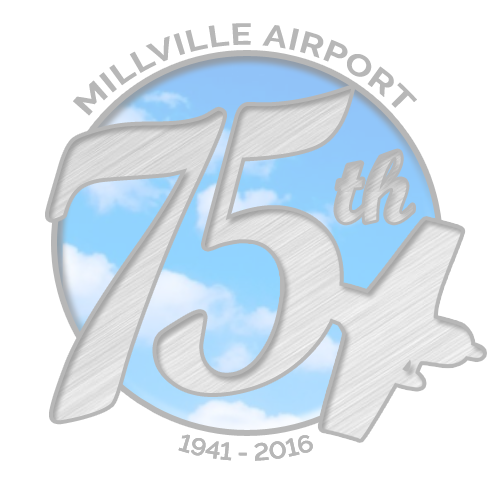 ABOUT THE
MILLVILLE EXECUTIVE AIRPORT

"An Amazing Future!"
The Millville Executive Airport was built in 1941 as a U.S. Army Air Corps base.  On August 2nd of that year, it was dedicated by the U.S. War Department as “America’s First Defense Airport.”  Over 10,000 men and women served here, with about 1,500 pilots receiving advanced training in the P-47 Thunderbolt heavy fighter bomber.  The Thunderbolt legacy remains an esteemed part of the community’s heritage, with the name still being incorporated in the branding of businesses, athletic teams and attractions – and as subject matter for public art and gathering spaces.

After the war, the airport was transferred to the City of Millville, under whose sponsorship it began to grow as a center for business aviation and related industries.  Since 1999, the Delaware River & Bay Authority (DRBA) has operated the airport under its charter to revitalize transportation links and promote economic development within the state of Delaware and the four southern counties of New Jersey that border the Delaware River and Bay.  The DRBA brings extensive resources to its management of the airport, as it also owns and operates the Delaware Memorial Bridge and the Cape May-Lewes Ferry system, and is the sponsor for four other airports within its Airports Division:  Wilmington Airport (ILG), Delaware Airpark (33N), The Civil Air Terminal at Dover Air Force Base (DOV), and Cape May Airport (WWD).  In Millville, it has undertaken the modernization of the airport and its transformation to Millville Executive, investing millions of dollars in new hangars and infrastructure, and leveraging those investments for over $25 million in federal funds for airfield improvements.

Millville Executive Airport is centrally located between New York City and Washington, D.C., close to Philadelphia, Atlantic City and Cape May, and is New Jersey’s second-largest airport after Newark Liberty International.  It also is near the Atlantic Coast for ease of international trade and is accessible to major highways and state roads.  Its strategic Northeast-Corridor location places it within an air-hour of more than 50 million people and some of the nation’s largest businesses.  Locally, it is extremely convenient to the “Jersey Shore” resorts and casinos, state game lands, and great recreation.
Millville Executive Airport Features: